What is NFL More or Less and How to Play It

More or Less makes it extremely easy to pick the players that you like to perform in a given game. Laid out cleanly, you get to decide if a player will compile More or Less in the following categories:

When you choose a player to have either the MORE or the LESS in a given category, all you have to do is worry about that player's performance. Pick your contest with the players you like, and lock in a More or Less for each proposed stat line that you feel confident in and let the good times, and cash, roll in.

More or Less is straightforward: pick the players that you feel have the best chance to outperform or underperform their proposed stat line in their game they are playing or slate (Early Star Shootout, Late Star Shootout).

Select the game you want to play.

For any given NFL game, there could be up to ten different More or Less contests to choose from, ranging from two player selections up to a five player contest. Each of these will come with different performance categories, players, and multipliers. More or Less turns every NFL game into a nail baiting and exhilarating experience. MKF makes every game, and every play count. 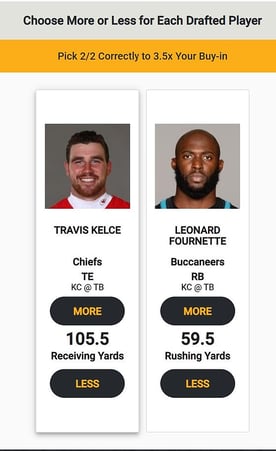 More or Less has some crazy multipliers. Depending on your choice of game, they range from the  2/2 contest where you'll get a 3.5x payout if you nail both your picks, all the way up to going 5/5 for a 15x payout.